We predict that it would be launched around 2011 or early 2012. Here are some rumors that we believe appears in AK Evolution. Note that this is only rumor, not confirmed yet.

Known Things
* Double Focus, Triple Focus will be added.
* Apollo and other Ver. 7 cards will be available.
* ?

In Version 14, the strongest rare of all which is bigger than ultimate rare is known as Kaiser Rare, a combination of Gold and Silver cards! There are 7 of these cards, so grab them while they still exists!

Free sequence on Version 6 (Deck A). Sequence file is in Excel format.

After Version 6, we will be having Animal Kaiser Evolution which will be the latest AK series as well. It features the animals from the Japanese series and some new features that Japan do not have. Double Focus, Triple Focus and Aura Explosion will be introduced here. We will start from Version 1 again, but don't worry, as new animals are available here.

Version 6 has already finished and released. The ultimate rare card will be Atlas which supports 9000 health!
The evil animals will also arrive in this version, and the other new cards such as Saturn Saw, Dirty Fighters and more. Evil Aura is also introduced here. Note that the Atlas here doesn't have the ability like the Version 7 does.

Note: This is the last version for the current English version of AK, but don't worry as the new AK series will launch.
at Monday, April 18, 2011 No comments:

Taiwan has made a news report about fake cards in Taiwan.

Written from the website (in Taiwanese)
警政署保智大隊 9日宣布查獲大批仿冒日系玩具，函送嫌疑人。其中，仿冒的百獸大戰遊戲卡（如圖）多從中國大陸進口，真假難辨。中央社記者黃旭昇新北市
at Monday, April 18, 2011 No comments:

Email ThisBlogThis!Share to TwitterShare to FacebookShare to Pinterest
Labels: End of AK - Japan

We announce that we have a major change in our previous AK forum, and now is already made. We are still adding some forums left, but you still can register! 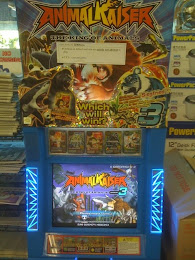